Continued: Live Experiences Of The Tarkhad Family With Shri Sai Baba Of Shirdi

As stated earlier I am going to make an attempt by stretching my memory to reveal one of the greatest Saints of Maharashtra Saint Gadge Maharaj. He used to visit our bungalow at Khar uninformed in the evening and then leave in the wee hours of the morning. I have seen him personally. He would were a robe made out of pieces of colorful cloth hemmed and stitched together and tie his head with a piece of cloth. Because of this attire, he was also known as GODHADI MAHARAJ or GODHADI BABA. He used to wear leather “Chadhav” as footwear and always carried a bamboo stick in his hand. The Bamboo stick had an iron cap at the bottom to protect it from wearing. He was a very ardent devotee of Lord Vitthal (Vishnu) and would keep uttering Panduranga…Panduranga…all the time. I think Dasganu Maharaj who would spread Sai Mahima through his Kirtans all over Maharashtra introduced him to our family. The focus of attention of Saint GadgeMaharaj was mainly to provide all kinds of help to downtrodden people. He also used to teach them the importance of cleanliness and would demonstrate it practically himself by sweeping the roads of the villages all over Maharashtra. “Cleanliness is Godliness” was his teaching, which can only free the villages from epidemics and diseases used to be his message to all the villagers. Of course, in the process if he could get grants from wealthy people he would collect and distribute them to needy people in the villages. After the Mahasamadhi of SaiBaba, my grandfather started donating the Tagas (rolls) of raw cloth to Saint Gadge Maharaj. My mother would stitch a “Godhadi” with her own hands and offer the same to GadgeBaba whenever he would visit our house. He would then bless her and carry the same for his personal use. I think love and affection which people of that time used to shower, are difficult to find these days.

As informed earlier Saint Gadge Maharaj was instrumental in forcing my father to buy a bungalow. He used to go around on foot most of the time and he had seen a bungalow at Khar Which my father had purchased outright for Rs. 15,000/- in the year 1923. At that time it was like a solitary structure in Old Khar and I remember we could see the Railway station, Mount Mary Church, etc. unobstructed from the terrace of our bungalow. Whenever GadgeBaba would arrive, he would order my mother who would then prepare special Roti of “Jwari” and “Zhunka” for him and that night we all would have “Zhunka Bhakar” dinner. Believe in me the great taste of those items is cherished in my memory forever. After dinner Saint GadgeBaba would narrate his experiences gathered during his “Padayatras” to various villages. GadgeBaba was certainly not an ordinary person but another messenger of God. I will now narrate to you what divine experience my father had along with him during his visit to Pandharpur with him.

GadgeBaba was a regular visitor of the Holy place of Pandharpur, which is a pilgrimage. He was an ardent devotee of Lord Vithoba and would always do his Namajapa saying Panduranga… Panduranga… during his free time. Once my father inquired with him whether he had met Lord Panduranga at any time in his life. GadgaBaba told my father to accompany him to Holy place Pandharpur. He stated to my father that he will have to stay there like a pilgrim and away from the luxuries available in his comfortable bungalow. My father then embarked upon the second visit to Pandharpur along with Saint GadgeBaba.

They were put up in a tent built on the sands of river Chandrabhaga. Throughout the day he went around along with Maharaj and witnessed how he undertook cleaning operations, how he offered advice to downtrodden people who flock around him and patiently listen to his sermons. My father got a fair idea about the social activities of Saint Gadge Maharaj and in the evening they returned to their tent. My father noticed that there were three mattresses laid inside the tent, each with a “Kambal” (black colored blanket) and kerosene Lantern hanging in the center of the tent. GadgeBaba told my father to relax and he would go and fetch some “Zhunka Bhakar” (special village dish) for eating. My father was inquisitive and asked him about the third mattress and whether it would be an occupant. GadgeBaba informed him that he had forgotten to tell him that he would have one guest of him for a night’s stay and will go away well before dawn. The guest will not cause any inconvenience to them. He declared that whenever he visits Pandharpur this guest gives him company at night. On saying this GadgeBaba left the tent. Soon darkness had settled in the tent, so also the temperature had dropped, my father started dozing and fell asleep. He was awakened by the call of GadgaBaba who brought some “Zhunka Bhakar” for my father. He apologized to him that he had already taken the dinner with his guest and my father can go ahead as he must be very hungry. In the meantime, he would go for a stroll on the riverbank. My father had a look at the guest. He was wearing a “Dhotar” and nothing on top. The color of his skin was pitch dark like “Bhills” (a tribe in India) and his eyes were red like burning coal. He had a “Kambal” on his shoulder. The most surprising thing was that the entire tent was filled with a strong aroma of Musk, which my father had never smelled before. They both left the tent and my father carried on with his delicious dinner. Yes, he had never tasted such delicious food before. The aroma of the musk played its role and my father was in deep sleep no sooner than he finished his dinner. He got up in the morning to the loud sound of a crowing cock. GadgeBaba was already awake. He told my father to rinse his mouth and drink the hot tea, which was waiting for him in the earthen pot. My father inquired about the guest when GadgeBaba told him that the guest had already taken his tea and left, as he had to be there on his duty before the Mandir opens. My father felt rather awkward and asked Maharaj, why he had not introduced the guest to him. GadgaBaba then told my father that he thought that my father would have recognized the guest who needs no introduction in “Pandharpur”. My father told him that at night he could not see him properly and he thought that in the morning Maharaj would anyway introduce him before he departs. Then Maharaj told him that the guest was none other than Lord Vithoba of “Pandharpur”. He asked my father whether he got an answer to the question, posed to him in his bungalow. Now my father could lay hands on that sweet and hypnotizing aroma of Musk. My father used to say that the aroma of the Musk accompanied him for quite some time and made him feel the presence of Lord Vithoba.

Saint GadgeBaba also offered one pleasant experience. He had also gone old with the passage of time and his last visit to our bungalow was also a memorable one he used to always come along with his “Kambal “(Coarse Blanket) and “Stick” and leave our house with his belongings. On his last visit, he forgot to carry his stick with him. In fact he did not actually forget to carry but I think he deliberately left it behind as a mark of remembrance. Why I say this because his style of walking was such that without the help of the stick he couldn’t have walked. My parents discussed amongst themselves to find his whereabouts and return his stick to him. But it was not possible to search him because he was in the true sense of the term ”The Roaming Saint of Maharashtra.”

Dear readers, I am sure you all must have found this episode also an interesting one. I once again feel that today we miss such Saints or Messengers of God amongst us and we also lack the presence of ardent devotees with their selfless devotion towards the Saints.

Continued to Chapter 17 – Writer’s Own Experiences 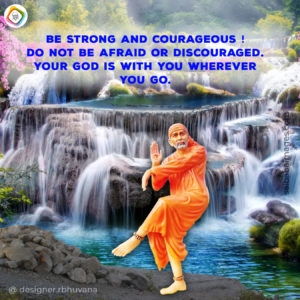