BHAU IS NOT A BEAST OF BURDEN

Whenever Purandarekaka went to Shirdi, Baba used to enquire about all the members of his family. He would then ask for special Dakshina and also for eatables he brought. Purandare’s wife would always send some ‘Naivedyam’ (offering) for Baba. When he would plan to return home, Baba would say, “Bhau, return after 2/3 days. Talk to Me for a while and then go. I will not mind if you will not stay now. Go, do not be scared. Allah Malik Hai. (/) I am there with you”. But at the last moment of his departure, He would ask him not to go. Then Purandare would alight from the horse-cart with his baggage and stay with Baba until His final permission to go.

One day Purandarekaka was sitting with Baba, massaging His feet. He demanded Dakshina from him. He said, “Baba, I do not have any money”. Purandare’s wife was there. She went to wada, and brought all the money, which was collected at the Laxmi Pujan. She offered it at His Lotus feet. (Laxmi Pujan is a special ritual in Diwali festival when people worship money considering it as Goddess Laxmi. That money is not spent then and kept aside as far as possible.)

Baba jokingly said, “You have emptied the money box before Me. This chap (your husband) is going to beat you”. She answered, “Never! He will never do that. Even if I give it to someone else, then too he won’t gen angry. Moreover I have given it to YOU. It is a good action, by which he will be happy”.

Baba was in a good mood. He added, “Okay, Okay Allah is there. You are fortunate that you got a husband like him. Remember what I say. Never hurt him. Do not cause him pain. He is Mine”. Purandare’s wife immediately asked, “Baba, whom I belong to?” Baba said, “You too are Mine. I will see that you will not be short of anything. You will not face scarcity. Be always broad-minded. Then Allah will be glad. He is the Protector. He is Almighty. Nothing is superior to Him”.

After giving them Udi, Baba gave them permission to go. Purandarekaka was working in GIP (now Central) railway workshop. He planned to go to Shirdi and secured passes being a railway employee. But his superior requested him not to go as there were chances of some riots in the workshop. He also agreed to issue him fresh passes for the postponed journey. But Purandare was eager to see Baba. He decided to go as per his own plan and went to sleep. At the break of the dawn, he saw a dream, in which Baba ran towards him with a cudgel hand. He was furious. Showing cudgel He shouted, “Mind well! Do not come. Why should you come every now and then? I am there with you, always. I never go away from you. Do not be stupid. Try to understand”. Then Purandare cancelled his programme.

Next day a strike was called in the railway workshop. Kaka could not go to Shirdi for the next whole month or so. But when he went, Baba said, “Bhau, do not be so impatient to come here. We have many things to do. Stay calm wherever you are and chant My name. I will meet you there. Ok! Who else has come with you?”

“How long will you stay?”

“I will stay as long as You do not allow me to go”.

Four days passed. Baba permitted him to go on the fifth day. He leaned on His lotus feet and broke into tears. Baba calmed him saying, “Why are you nervous? You have to stay at both the places. Here and there, at your job too. Do not worry. Do your work. Allah will look after you”. With Baba’s consoling words Bhau resumed his service.

On Good Friday Kaka again went to Shirdi, alongwith his family members. Baba said, “Bhau, I am coming to your place for lunch”. (That his daughter Babi ill.) Kaka asked Baba, “Who else should be invited?”

Baba answered, “Your daughter is not well; so let us cut it short. Only 2/3 fakirs, with you and Me”.

“And what would You like to have for lunch, Baba?”

“Some rice, khichadi, rava-halwa and a subji! That’s all”.

Purandare asked his wife to cook the items. She was very happy as Baba was coming of His own. Before cooking she went for His darshan, with her sick daughter. Baba blessed her with Udi and sent them back.

Purandare’s wife cooked the food for expected number of persons. Kaka placed the dishes. Just then 5/6 fakirs came. One of them said, “Many more are coming. Baba has invited all of us to your place for lunch”. Kaka was confused and scared also. Because the food was sufficient for a few people only. He served all those who had come. More fakirs came in tens and twenties. But it was Baba’s Leela. There was no shortage of food, instead the food was left over.

Bhau then went to Baba with Vida (rolled betel leaves with masala) and Dakshina. Baba was talking to Fakirbaba. He said, “Today I have overeaten at lunch.” Then He told Kaka to go home and take his lunch. Balaji, (Purandare was staying at his house, in Shirdi) then went to Dwarkamai. Baba asked him, “How are you, Balaji? Was there enough food for all who came?”

Balaji said, “Baba, why do you test poor fellows like us? You had said 2/3 fakirs. Actually they were more than thirty. But Your Leela and Your grace is limitless, Sadguru. It was sufficient for all and still lots is left over”.

Baba smiled and said, “Allah looks after one and all. And look, Bhau is My devotee. I know that he is not a beast of burden. How would I pressurize him? I helped him. It was not a test. I did it for the pleasure of My devotee”. Balaji was dumbfounded and unable to speak. Puradare and all others stayed at Shirdi for another three days eating the Prasadam, and then they returned home happy and contented.

Lord Sai Baba appeared in Dr. Gawankar’s dream and instructed him to start Ram Navmi Utsav (Festival) and also prepare a cradle for him.

Ram Navmi Utsav starts from Gudi Padwa day and ends on the ninth day, that is the birthday of Lord Ram.

Dr. Gawankar as instructed by Lord Sai Baba started Utsav on Gudi Padwa day, but he thought that a Idol of Lord Ram was necessary as it had to be placed in the cradle on Ram Navmi Day. Dr. Gawankar had already got his bed dismantled and cradle was made out of it. Therefore, he prayed before Lord Sai Baba’s Photo to help him to procure Lord Ram’s Idol which was not available in the market. Even a made-to-order Idol would take two months. He then took vow that he will not take food till he gets a Idol of Lord For Ram.

That year Ram Navmi Utsav was on Saturday and Dr. Gawankar was on water without food in his dispensary. Two days before Ram Navmi day i.e. on Thursday with his known patients waiting in que, he observed an unknown man, very attractive wearing a Puneri Pagadi (a kind of turban) with shirt, coat and dhotar (a kind of Indian lower apparel), also sitting in que. Dr. Gawankar asked him, “What is your problem?” He said, “I will come in queue.” When he came across the table, he placed a packet in front of Dr. Gawankar and getting up said, “I am coming back.”

Dr. Gawankar opened the packet and found Lord Ram’s Idol. His whole intellect and physical frame were engulfed with supreme bliss. He realised, he had just taken live darshan of Lord Sai Baba and tears of joy started rolling down his cheeks. He was very exulted since all the requirements for Ram Navmi Utsav were fulfilled and it was performed with faith, Love and joy. 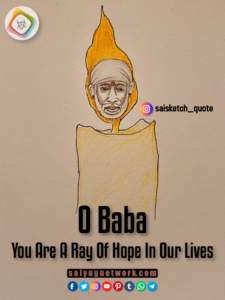