I have given you exact and moment to moment description of the happening. All my family members had Baba’s darshan. From the advice He gave, it can be correctly inferred, that that fakir who visited my house was none other than Baba Himself.

(1) He said that he was hungry. But when rotis and chutney were prepared, He distributed the whole stuff amongst us, as Prasadam. In Sai-Satcharitra also we find parallel event. Saying He was hungry Baba asked Laxmibai to prepare food. She came to Dwarkamai with ‘Chutney’ and ‘Bhakri’ (roti) for Baba. But Baba did not even taste it. Instead, He put all the stuff in front of a stray dog. Seeing this Laxmibai was disappointed and upset. She asked, “Baba, if you didnot want it, why did you trouble me unnecessarily?”

Baba answered, “When all of you eat, I feel that I have eaten stomach-full” (In word ‘You’ Baba included even animals than human.) I want to underline similarity the events.

(2) Intermittently He muttering, ‘Sripad, Srivallabha’. This sign indicates Dattatraya. Baba’s robe was orange and He wrapped his feet in a green cloth. (Green colour points out to Muslim tradition) Dattatraya had given darshan to saint Eknath together with Janardan Swami, in a disguise of ‘Malang’ (Muslim saint).

(4) The Sadhu took the names ‘SriRam, SitaRam’. Sai Baba too was a ‘devotee’ of Rama. He started ‘Ram Navami’ (Day of birth of Rama) Festival at Shirdi. In a legal matter Sai Baba was examined as a witness by a court commission at Dwarkamai. As per the court procedure, Baba was asked to swear in. He had uttered “Sri Ram Jai Ram Jai Jai Ram”. (Ref: SAILEELA magazine, 19 Year, Issue 23, “Dasganu’s Story”) Baba had told one lady to recite ‘Rajaram’. For Him Vasudev-Hari was Vitthal of Pandharpur. Once, Kaka Dixit was meditating while in Shirdi. He got the darshan of Vitthal during meditation. After he finished it, he went to Dwarkamai to see Baba. Baba instantly exclaimed, as if it was known to him, “He is always running; but you could meet Vitthal today; isn’t it?”

One more instance; Nanasaheb Chandorkar was transferred from Nandurbar to Pandharpur. He came to Shirdi for Baba’s darshan. But before he arrived at Dwarkamai, Baba said to the people around, “Doors to Pandhari are open!” And he started singing Bhajan. Mhalsapati, Appa Shinde and Kashiram joined Him. Th words of the song meant, ‘Let me go to Pandharpur! Home of my beloved is at Pandharpur’. (Ref: Sai Satcharitra, Chapter stanzas 111 to 125.)

Fakir said, “Dwarkamai is my mother”; he had ‘Satka’ and chillum. All these things were related to Sai Baba. Dwarkama was the name He had given to the masjid, He was living in. All these points make it clear that the Fakir was not an ordinary Fakir, but surely was Sai Baba.

(7) Fakir spoke about four types of ‘Char Snana’ (Bath). It has a profound base, as details of this subject are discussed in various ‘Shastras’ (the ancient sacred books).

(8) For the words ’emotion and ability” Baba used different words, ‘Faith and Patience’. Though the words are dissimilar, they reflect the same meaning.

(9) “Sadguru is greater even God”. The Fakir had said. Once a devotee of Baba, named Mankar, was told to go and stay in Machhindragadh. But Mankar was not ready to listen to Baba’s order. He did not leave Shirdi. He had strong urge to stay at the Lotus Feet of Baba. But ultimately could not disobey his Sadguru, and had to go to Machhindragadh. While in meditation there, he saw the clear image of Baba his heart. This was enough to prove Sadguru’s greatness.

(10) Fakir talked about Geru. (Geru the colour stone used dye the robe in orange.) When Sai gave darshan to K. N. Pandit Dhootpapeshwar. He had referred to Geru.

(11) “Where have you come from?” was the question asked Fakir. To this Fakir gave a vague answer. In Sai Baba’s case also, there is no certainty about His parents, His town, even about His real name. When He came to Shirdi, Mhalsapati greeted Him saying “Aawo Sai”. Then onwards He was known Sai. Once Sai took Kakasaheb Dixit with Him to Maruti temple. He pointed out towards the idol and said that those were His Parents. (It indicates He wanted to say that He was a Vayuputra. God Maruti was a Vayuputra son of Wind God according to Hindu Mythology.)

(12) In 1936 A.D. Baba had given me the word ‘Sri Ganesh’ as a ‘Mantra’ (Name of God to be chanted continuously the mind). Of course, He gave it to me through dream. Same way He instructed my guru Trimbak Vitthal Samant, also. Since then I have always considered that my guru and Baba were one. And They must be one as I thought, otherwise, how the Fakir would mutter the chain of names, Sri Ganesh… etc? How did He already know the name of my guru?

(13) The fakir was sitting in the balcony. But He suddenly went downstairs and came back in five minutes. Reason of this action of His remained unknown to us.

(14) Now I will tell Him to pay off your loans. The Fakir had said. Baba also used to say that He would tell Allah to look after one’s welfare. The Fakir’s advice was subtle, penetrating and accordance with ‘Bhagwat Dharma‘ (Righteousness). It indicates that the Fakir was a spiritually elevated soul who had attained the highest level. All the above clarification were enough for our conviction that the Fakir Baba, Who came to us in Avadhoot Form.

On Tuesday, 19ª January 1954, Baba left our house and disappeared at about 9:30 a.m. Next week, on 26th, I had shown you the article written by me describing this incident. I then sent it to Nagesh Atmaram Sawant, who was a managing trustee of Shirdi Sansthan, also an editor of ‘Sai Leela’ journal. But sub-editor Rane could not accommodate it in the very next issue, for some reason or the other. Unexpectedly it was printed in ‘Lokmanya’ Republic Special Issue. Does it not reveal Sai Baba’s marvel grace upon His devotees? Only by His blessings, the devotees (e.g. myself) came in the limelight of publicity.

You must be remembering one occasion, when both of us had been to Shirdi. A person named M. A. Lathi, who was disabled and could not speak, was there. He was using slate and chalk to convey his words. You requested me to pray to Baba for him. By writing on the slate I asked Lathi to say the word ‘Shri Ram’. I explained to him how to pronounce it. Do you recollect the event and that person? The same Shri Lathi had come to see me on 22nd. Initially I could not recognize him because he was able to speak clearly and fluently. He thanked me for the word Shri Ram that I gave him and had prayed to Baba for him. He said he would write to you. He had been to Barrister Jaykar also. It was definitely Baba’s power and grace that Lathi overcame his disability.

Annasaheb (Kamat), now something about what I heard casually. But the matter is not so casual. Are you thinking of renouncing the world and becoming an ascetic? In dilemma, you have asked somebody as to what should be done. Isn’t it? To tell you something in this matter or to advice you is beyond my ability and my limits. But a Sanskrit verse says “Baladpi Subhashitam Grahyam” (i.e. General truth can be learnt from anyone, even from a child. Right advice can be accepted even from a child.) Considering this I dare to express my opinion clearly without any hesitation. I would like to remind you, the book ‘Nama Chintamani‘. This book, which is written by you, is not merely a book. It is, as if ‘Paramatma’ (the Lord) is presented to the world through this book by you. Many people who followed it have experienced the fruits of it. Why should a person like you, who have given people the experiences of Realisation, think of renunciation? I think, even a higher title than ‘Hans’ and ‘Paramahans’ also will not be sufficient to honour your work, your ability, your intelligence and your sacrifice. You are above such titles. So I pray to the Kind Parameshwar to let you remain as and where you are. Your being with us is most important and invaluable to us.

These days, you must be busy in writing the third volume of Nama Chintamani’. If you have finished reading “Guru Prasad’, please send it back to me. Please accept our reverential salutations at your Lotus feet, from all my family members. My wife Sushila humbly requests you to visit us. She is eager to prepare and offer ‘Solkadhi’ (soup of kokam) and ‘Mooli subzi (cooked radish) to you, as she knows those are your favourite dishes!

(The letter was written by the author of this book to Shri Annasaheb Kamat ends here.)

The letter was dictated by the author, Dr. K. B. Gawankar and written at the hands of Shri Vasudev Mandke. Note for readers: Sai Baba had taken Samadhi in 1918 A. D. and the Fakir visited Gawankar’s house in 1954. It is sufficient to prove that the event that took place on 18.01.1954 was not an ordinary one, but was a miracle! 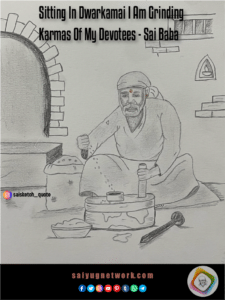 Part 2 – Chapter 23 – All About His Photographs – ShirdiChe Sai Baba